Late April of 2017, a wayward wander online has me finding 6 of Elton John's prime 70's albums on "WhoTube", track-for-track, as isolated vocals !?! 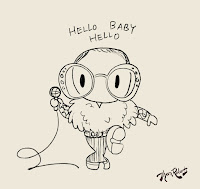 "Hey you masher guys ! . .  don't this seem like perfect fodder for a big ol' tribute comp ?"
One disc of "Goodbye Yellow Brick Road" mashed in sequence, and a second disc covering his wider range and career.

A teaser taster video promo-spot for the 2-Disc Comp featuring a range of modern mashers !

"Mashmen Across The Waters" < Link !"not-for-profit / demonstration only" ! 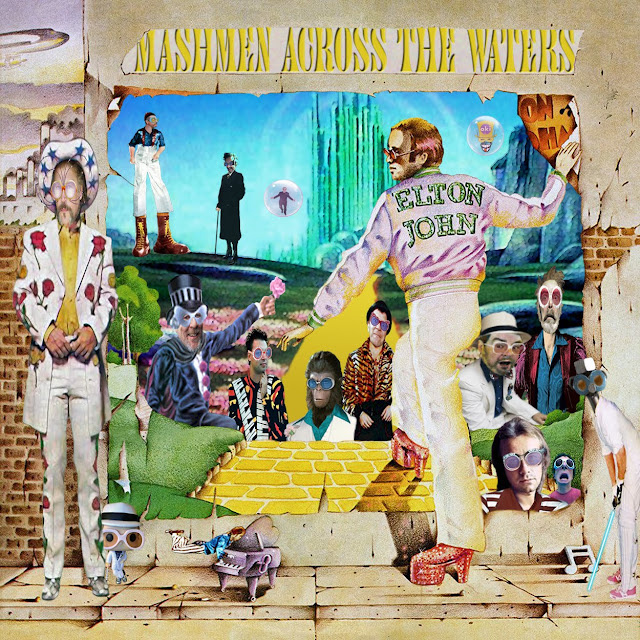 The 1st responses came right away !:
Voicedude was "so dialed-in" and provided many key tracks.
His presence is second only to my obnoxious dominance . . .

I originally thought a September release was likely . . yeah, Sept 2017 !!
But aside from perfectionist tweaking and some pitch-help from master-mashers like DJ Rudec, life insisted on happening. It's been a tumultuous year, it has.

Oh . .  and other projects diverting ones energies too !
Comps like "AudioBoots 90's Mashed" or "Summer Booty 2018" may have occupied the front-burners from time to time . .  you know ?
( or those couple dozen new damn ideas I could not stop havin' ! )

But there was always something moving forward with it.
(( and thanks as always to DJ Useo for continual feedbag and final mastering ))
Should you delve into the absurdly comprehensive liner-notes, hopefully you can open a .rtf file. That's where all the hyperlinks actually work ! . .  unlike the clunky lookin' pdf. Those notes take about a 1/2 hour's read ( I just timed it ! ) and answer just about any question you were never about to ask ! 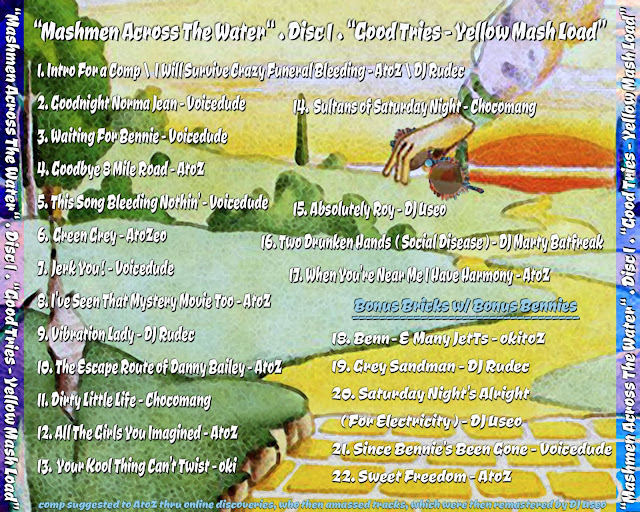 New ideas are generally exciting, and it's always gratifying when it leads to something fun existing that wouldn't have otherwise.

(( kind'a like this entire comp, really. I'll occasionally get a deep chill realizing these wondrous works wouldn't be all existy if I hadn't called out unto you all for submissions. That may be the most satisfying thing about this )) 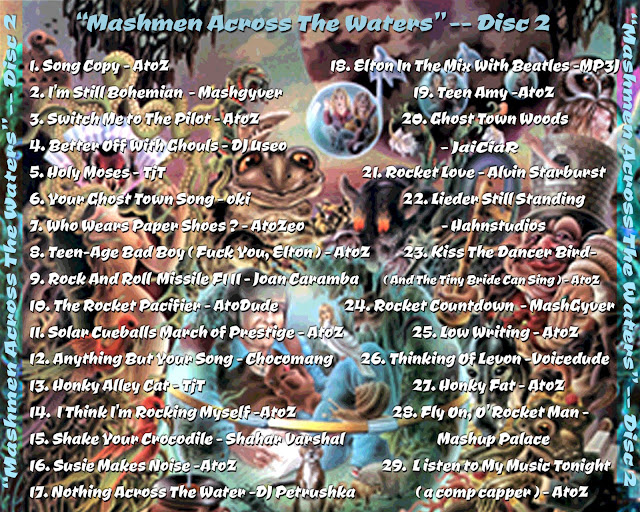 And I realized while adding to the exhaustive Project-Notes awhile back . . .  Elton just might've had more far-reaching hits then some Comps that were collections of the semi-obscure !
A somewhat higher name-recognition amongst a wider world of peopley types ?
I truly hadn't thought of this before writing here, but our little comp just might have the reach to dominate the world of online mashery. .  . mwah-ha-ha-ha-Ha !!

for about 17 minutes on a Tuesday afternoon.

Another encouraging thing ? . .
Elton his own self would likely enjoy this a big ol' bunch !
I'm going by stuff he's said since the darn 70's, and right up to the quote I use in the very first section here of the very first piece - "Intro For a Comp" ---
"I thought it would be nice for some new artists to give their interpretations of some of the songs"

Posted by DmRofAtoZ at 2:32 PM