"The Days I Met Harry Nilsson" - - - in four escalating installments ! 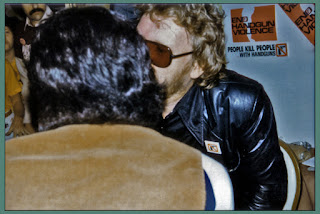 I get to present 4 different encounters, and I can even lay them out here in escalating order . .  from "minor" to major . .  you'll see !

4 - During the summers of `75 and `76, I was living in Greenwich Village.
It was at some point during that second summer that my brothers Jeff & Jim came in to spend a day with me.
They must've caught nearly the last bus home that night for I recall it was already dark and they was still with me as we were wandering up the bustling central "tourist-trap" that was West 8th Street, between 6th Ave and Macdougal St. . . . and just a block north from a corner of Washington Square Park.

And why do I vividly remember that we were just comin' up on Electric Lady Studios ? . . .  because that was the point that Jeff or Jim said "Hey, that was Harry Nilsson !"
I turned in time to see a profile in the back of cab that was beginning to pull away. A face that, till then, I had only seen on album covers !

I also recall that I knew right then that if I'd seen him 2 seconds earlier, I would've called out "It's the Moonshine Bandit !!!"
"...That's the Way It Is" had, of course, been recently released and "Moonshine Bandit" was at the top of my "Heart's Fave List" . .

It just hit me while tapping this out . . .  who was Harry visiting in that famous studio ? . . .  wait ! . . .  was John putting finishing touches on "Walls and Bridges" ?!
Nah, . . . that was the year before and at different studios like Record Plant.
Well, whatever had him there at that moment, I'd probably just had my closest encounter and it was a near miss.
Would I ever see another chance at such a convergence, or was I to be satisfied with merely a "brush-by' ?

I suppose it would'a been "Easier For Me" to just "Turn Out The Light" and go "Home"
. .  and you know that's "Something True".

I'd already been delivering auto-parts for a year and 1/2 . . . all around Rockland County N.Y. . . .   from Suffern in the west and east to Nyack.
A town Nilsson was known to have a home in, right in that same time-frame, and was no doubt frequenting the local businesses !

So . . .  I'm headin' down Route 303 towards the Nyack area, comin' up on an auto-body shop on my right. Out comes a wee sporty lookin' car lookin' to make a right and be in front of me. I certainly don't remember him cutting me off dramatically, yet I was close enough to see a familiar face ( I have now convinced my memory that he was driving a convertible  ! ) . .  and in the middle of the day this time too !

Twas Harry again !! . .  "Daylight Had Caught Him" !
It would now seem that my sightings are sharing a theme around the "...That's the Way It Is" album, but that ends here.
I never bumped into him at a "Zombie Jamboree", and I never saw him literally "Sail Away". But now, at least, I've had more than "Just One Look" !

As I followed along behind his car that afternoon, I knew this encounter had reached it's zenith.
What ? . . .  was I going to pull up alongside him and look deranged as I yelled at his window something like "Hey Nilsson !, you kind'a cut me off back there
. .  what'sa matter Harry ? . . .  "Are You Sleeping" ?!?!"

If this had been the 2nd encounter, it would've been frustrating to have another brief brush, but I'm telling these in order of "significant connection", so now we jump back to 1982 :

Twas the Fest of `82, held at a "back-up" site in Port Chester, NY.
There was some reason they couldn't book their regular Meadowlands Hilton, so this was a first.

At this point, Harry's Anti-Handgun campaign featured a kissing-booth. Selling kisses for a buck each.
"With a Bullet" was soon to be recorded, and the offer to record a song for a $500 donation would go to "Judy" at this Fest.

I, and brothers Thom and Jim attended . .  with Jim both taking a few snaps and recording highlights on his fancy schmancy Sony Walkman !
( yeah, that's right  . . . Sony Schmony )

This particular encounter with the Nilssman was actually documented 4 different ways ! :

1- In written recollection -- just like the other times reported here.

2- In those couple snaps Jim took, with me getting a lovely hetero Nilsspeck on my cheek, and brother Thom exchanging a mighty handshake with our Harry hero.

3- Thru the cassette I'd thrown together of a range of his "stuff" and left the title-space for him to sign.
( and of which he gosh-darn did ! ) 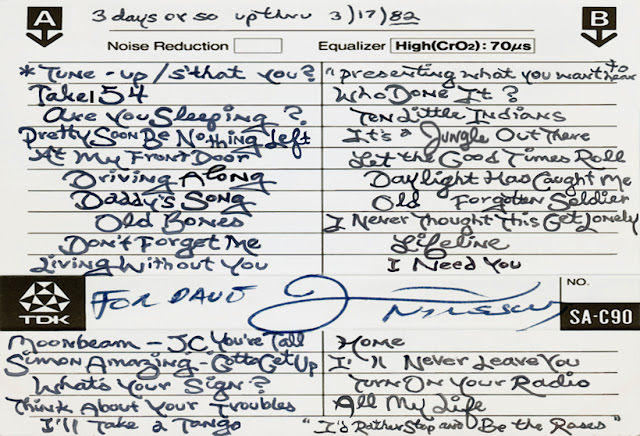 (( and a quick note on that cassette-card, shown here:
Not to focus attention, but my handwriting is so odd !!
I was no doubt writing on an album cover balanced upon my
knee, but I must've been slow and deliberate about it . .
. .  overly conscious that Harry would be seeing it.
It changes "style" every 3 letters !!
and my present Photoshop fiddling to clean-it-up has prob'ly
only enhanced the stilted weirdness ! ))

4- And !! . . thru the audio Jim recorded, we hear the 3 of us working our way towards him on the line at the booth, and meeting him.
At first, you hear him from a few feet back, talking about songbooks with an anxious fan . . . rather quickly, after I uninformedly tell Jim that the money is for a kiss . . . "Kiss Me, Harry !" . . . I believe Thom first gets his handshake, followed by me nervously explaining to the Famous Spaceman that the tape's "all you, I just left the title open . . scribble anything", when he asks me my darn-fool name.
I guess about then is when I got my photo-documented cheek-peck.

You'll hear the agreeable Harry being told by ladies with cameras to "look up", and then "smile" . . . you'll hear Harry make change !!

In the even more exciting Part 2, Harry sings "a coup'la lines" ! . .  . WPLJ DJ Jimmy Fink suggest doing a couple lines !! . .  Harry fulfills a quick request for "I'd Rather Be Dead", and Jim informs him why he's back on the line for a 2nd time !

And the last 1/2 minute segment features me seeing off Thom and Jim.
I was staying overnight in a room upstairs with my friend Tony, you see . .  and the brothers were embarking on the 26 mile ride back home.
It was as they stood in the doorway of departure that a Beatley singalong broke-out just behind us, appropriately declaring "there's nothing for me, so I will disappear".
The delighted "cackling at the uncanny" is mine.


(( In order to share this "You Are Here Cuz We Was There" audio,
I've obviously slapped-together a video where We Meet Nilsson.
We see the 4 pics Jim snapped: Thom's handshake,
my Nilss-peck, plus . . .
and just about every decent pic I could find online !
Mostly towards the end, I increasingly work in pics from the next Fest,
where Harry's red vinyl offering has appeared.

But ! . . Jim didn't end-up in any of the The Fest pics . . . cuz he was taking them !!
So when we hear him going thru Harry's line a second time, I've opened on him in a pic that Thom must've taken back in Park Ridge . .  as we prepared to head to The Fest.
We're emulating that infamous shot from "Magical Mystery Tour" . . . Jim's doing John, I'm as if Paul. Pal Tony is replicating George's subtle "flip-the-bird" gesture . .  and we dragged non-attending brother Jeff outside real quick to Ringo it up ! ))

1- It's onto the following Fest ( of March 83 ? ) where "With a Bullet" was being played on a continual loop. We were back at BeatleFest's normal home in the New Jersey Meadowlands Hilton.

I stood in line for the chance to shake Harry's hand & make a contribution to his anti-handgun campaign.
"Bullet" was full-blast blasting as I leaned in and found myself bellowing at Harry that "I'm actually a DJ at a station in north-east Jersey and I play stuff from your entire career span". ( true story ! )

But he turned to someone in his "posse" for a quick look and then went about writing something down on a small triangular scrap of paper . .  which he then handed to me.

I stood there with stupefaction adding itself to the surreal state one goes into while bellowing at your idols.
I look at Harry wondering if this was the deli-line number he'd call out when he was ready to slice me some olive-loaf, and a friend next to me had to say "That's his room number".
"oh . . .  I . . .  OH !!!" 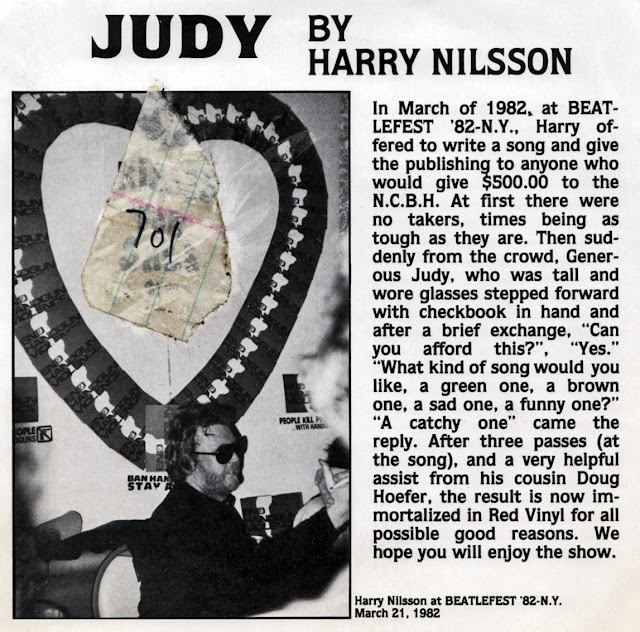 Harry either thought I was implying a requested interview, or perhaps he himself was proposing such a fine idea !

I may have bowed several times like a wind-up idiot as I stumbled away and proceeded to spend an hour or two floating around the Fest wondering if this was something I was ready to do justice.
Did anyone have a recorder ? Would I take notes furiously ?!
Would we hit it off to the point where I awoke 3 days later to find Ringo asking me not to sleep on his towels like that ?

The inevitable reality here is that once I saw that he'd closed up the "Bullet-Booth" for awhile and was away, I bravely ventured up to Room 701 only to find a "Do Not Disturb" sign hung on the door.

So that's how that ended, but it takes nothing from the coolness of his reaction there at the booth. I still have the hand-written room-number of course. . . . as seen above !

A wonderful exchange, and 4 or 5 years later Harry would challenge me to a friendly informal game of chicken on Route 303 !

I have these "Close Encounters of The Four Kinds" to treasure forever  . . .  every bit of music and all the fan-stuff that continues to come out and make it all seem new & renewed again  . .  . and the ever deepening community of fellow Harry-Heads to share with.