Well, this sure came out with about as much righteous glow and stirring humanity as I had hoped !

I know most of us mashers would say, if they had a track that felt rather "Voicedudey" in its concerns and also it's use of Klaatu and such. . & they asked Voicedude if he thought he could adjust it much quicker and more accurately... and he said "Sure !" ?!….
Well, you'd say things about how honored you were, and boy --- I sure am !
But beyond that, we're talking about a producer who's not only impeccable in his construction and craft, but is one of the few who can balance snazzy musicality with whimsy and a range of human spirit ! His work has been impressively slick while maintaining humor and engaging verve, man ! 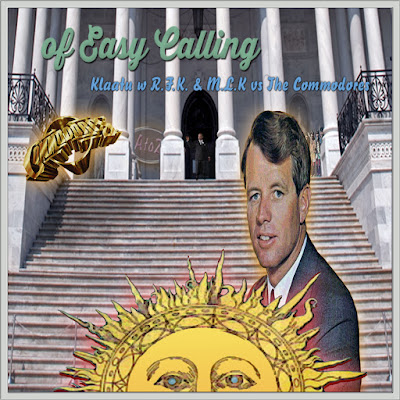 For "of Easy Calling" here . .  well when "Easy" came out in March 1977, I noticed immediately ( and still recall right where I was ) how the "ah ahhh ah aaahhh" backing vocal was a complete "reflection" of the vocal from Klaatu's "Calling Occupants of Interplanetary Craft" released just half a year before !

So those seeds were sown since then, to one day mash one upon the other . .  but I'm pretty sure it wasn't 1977 when I read, or had DJ Useo tell me, that Voicedude was quite the fan of Klaatu . .  I'm thinking that must have been more recent.

If one knows a V-Dude track like "A Whiter Shade Of Peace" from 2011, one knows even more fully why I thought this might go right up his alley and salute his flag.

And just to be clear, it was chiefly the Klaatu sample "we are your friends" where I knew my do-it-by-ear skill-set could use the help of a fully musically-trained soul like Joel, whose 1st response included "I LOVE the idea". I sent him all the separated elements and he did some light but invaluable tweaking to other aspects of Klaatu as well.
I was then able to finish work on the overall piece with a fuller tank of assured endorsement and pride . .