The Suite of The Courtship of The Mr. Eddie's Father

The Suite of The Courtship of The Mr. Eddie's Father < folder link !


"Nilsson: The Life of a Singer-Songwriter" by Alyn Shipton certainly filled-in many parts of the picture of our Nilsson Knowledge !! .  . in areas big and small.

And learning a lot more about one brief period in particular made me put down the book
and jump online to see more, but it's some stuff I see no record anywhere of anyone having collected and presented !

The unique "songlets" that Harry and George Tipton recorded for the 1st nine or so episodes of "The Courtship of Eddie's Father".

Scene-specific musical moments lasting a few seconds to a minute or so.
And there's as many with Harry singing scene commentary like "careful with the coffee for your Dad" as there are scoring variations on "Best Friend" or "Little Cowboy" that are so completely Tiptonesque !! 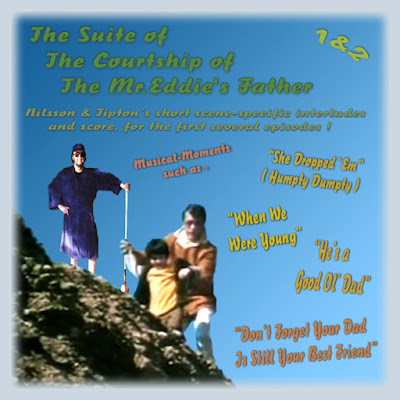 The wonderful thing about Harry ( is Harry's a wonderful thing ! ) . . .
and how there's so many distinct career phases to suit yer' moods !!
But sometimes there's nothing like that "golden" period when Nilsson and Tipton worked together, and one month after the "Harry" album came out in August of `69, "The Courtship of Eddie's Father" premiered as a series. One could assume the sessions for both projects alternated to some degree.

"Komack's highly original idea for the music was to have Nilsson sing occasional interludes, in the same way he had handled the closing credits on "Skidoo'".
He could move the story along, comment on the action, or simply set a scene" 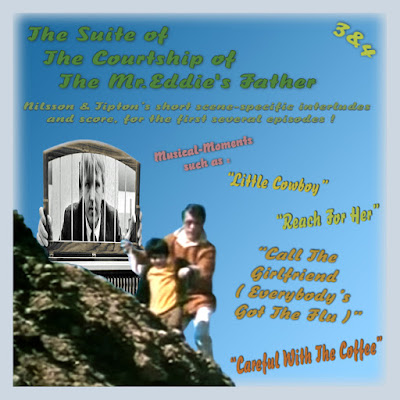 I doubt ( and would love to be proved wrong ) that the original master tapes for these sessions are likely to surface ( having remained, no doubt, in the hands of the original TV network ) and provide us with clean takes separate from any episode dialogue and sound effects . .  but I'm okay with that.

It ends up forming a slightly surreal context as spoken bits from scenes, and characters we weren't introduced to, weave in & out.

I've also kept in mind, while assembling these, that some of the shortest bits of Nilsson singing a songlet, essentially new to us, fly by in as little as 5 or 6 seconds !
So the approach became more "dreamlike", and many of our new faves here return 2 or 3 times, like mini-movements in an impressionistic suite. 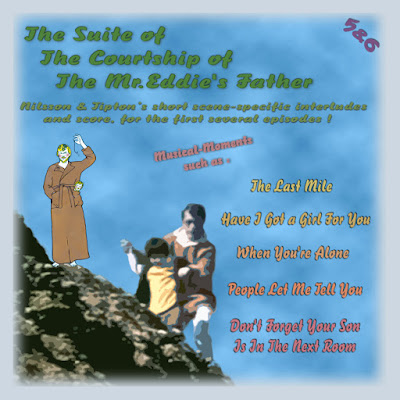 As I said above, the series premiered Sept. of `69, a month after "Harry" had been released . .  so we can imagine that spring & summer of that year saw Nilsson and Tipton alternating their attentions for both projects. Perhaps the seeds of "The Point !" were already planted as well ?
The overall "point" here is that I had already read that Nilsson's active contributions had been for "the first 9 episodes or so", and as I worked my way along thru episodes 8, 9 and 10, I found this was true. The Nilss-lines were beginning to peter out !!
A wonderful new variation from Harry on the phrase "best friend" still occurred in ep. 9 "Gentleman Friend", but as I checked ep. 10 "Any Friend of Dad's" just to make sure Harry had indeed left the building, I momentarily thought "wait, here's some new vocals still !!" . . . but it only took a moment to realize "hey, that only sounds like Harry ! . . . Tipton has gotten someone doing Nilssonesque harmonies here !"
So a few examples of that continuing "tribute" are included ( Eddie answers the door-bell thru "are you all grown-up ?" ), but we wrap this collection w/ the Moonshine Bandit himself in a Recap Suite !

If I stuck to my plan, and shared these with the FaceBook SchmaceBook Group after "The Popeye Demos", then I've employed the same wonderous effect within GarageBand that I did with Schmopeye . . . the Stereo Simulator !!
I am continually thrilled with how it seemingly "knows" to, say . .  place an oboe slightly left, light percussion panned a bit right, and a nice subtle spread on a centered-vocal ! 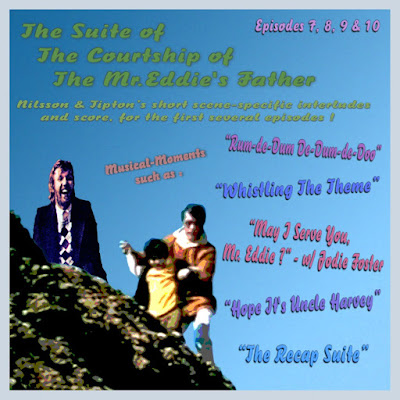 You may also guess correctly that I was not privy to the session-sheets, so if these little gems were given full proper titles, I would not know !
So they've been named rather simply and clearly . .  and it's pretty cool too !

Posted by DmRofAtoZ at 5:08 PM No comments: